Remember Guys this is the 27th of July, Food fun and frolics will be in abundance as will a mass Longboard cruise, so get Excited!!!!!
Posted by Exmouth Beach Rescue Club at Sunday, June 27, 2010 No comments:

Today was an absolute scorcher, People descended onto Exmouth's sands in droves, today thanks to the newly qualified lifeguards we were able to run two outposts, one based at Orcombe Point the other was just in front of the Lifeboat slipway where our Arancia Surf Rescue boat was situated in case of Emergency.
We responded to 7 first aids, the escort and removal of 11 bathers from Orcombe sand bar and Kierron claimed his first official rescue to a young girl who was unable to swim back following hers and her Fathers lengthy swim out to sea.
A Jellyfish was removed from Orcombe away from the bathers. However it got the last snigger as it managed to stick its tentacle to the side of one of our Lifeguards legs before being disposed of.
We offered advice and information on tides, beach topography, Exmouth's concessions and Exmouth's Landmarks to over 50 individuals and families at Orcombe Point alone.

The volunteers did well today and look forward to improving on our new move towards Orcombe and the rookies experience as we move into the busier periods of the summer.
Posted by Exmouth Beach Rescue Club at Sunday, June 27, 2010 No comments:

Our Lifeguard Course and Exam was run over two weekends 5/6th June and the 19th/20th June by the local company East Devon Training. They are very professional and are a very friendly company to work with.
Based in Exmouth, This Company is both an RLSS UK (Royal Life Saving Society) and a RYA (Royal Yachting Association) Approved Centre.
Andy the Companies Founder can Provide anyone willing to learn with the Knowledge and Physical water-borne ability  to complete any of the following,

First Aid at Work (New three day syllabus)
If this is what you are looking for or interested in then dont hesitate to contact them, the are contactable using the following details.
andy@eastdevontraining.co.uk
You may also call them on 07878543413
between 0800 and 1700.
Posted by Exmouth Beach Rescue Club at Tuesday, June 22, 2010 No comments:


Sunday the 19th was the penultimate day for our prospective new lifeguards, The Candidates ranged from 16 years old to 47 years young.
The Course itself was The Royal Lifesaving Society National Beach Lifeguard Award and our candidates were

.
They all deserve huge congratulations as all obtained passes thanks to the hard work and effort that they put into the course!!!.
Posted by Exmouth Beach Rescue Club at Tuesday, June 22, 2010 No comments:

The Crew Dan and Snowy returned from the triathlon having thoroughly enjoyed themselves despite seeing a bit of rain towards the end of the event.
Here are some pics from their weekend. 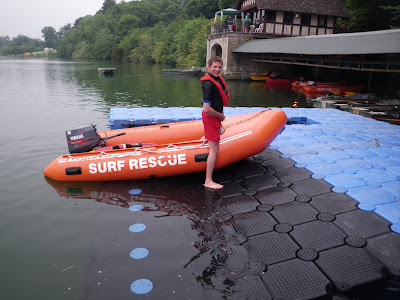 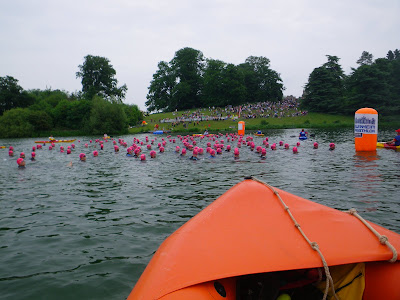 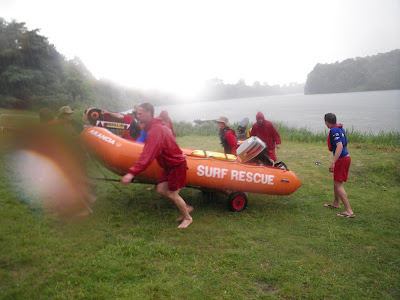 Being the first sea swim of the year in the British Long Distance Swimming Association calander, Exmouth is considered a gruelling test.The swim starts 75 metres east of the Mamhead Slipway, Exmouth Marina. It proceeds out in an easterly direction to a boating channel called the Swash Way, out to sea and the Exe Estuary Buoy, marking the end of the Estuary and the start of the open sea, a circuit is then swum before
turning to swim in a Westerly direction back to Exmouth Beach and completion of the swim back
at the start point near the slipway.

The usual course is 5 miles (8km) starting in the warmer waters of the estuary and heading out into the open sea where the surf is up and the temperature down.


Today the surf was very choppy especially out beyond the sandbar, which proved difficult to negotiate for both Swimmers and Kayaks alike with with both sickness and capsizing issues resulting in rescues.


Snowy and Tids were the cox and crew respectively for today's epic event, this involved following the back-markers for the duration of the swim and rescuing those swimmers in need of assistance if  required, at the turn one of the Swimmers had to be picked up due to sickness, which is documented in this series of photographs taken 2 miles from shore. 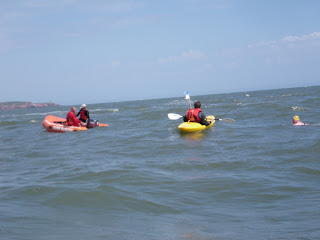 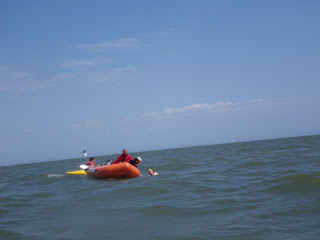 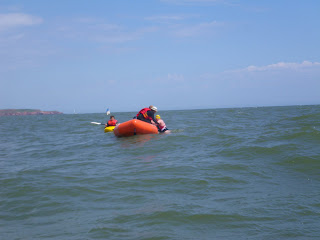 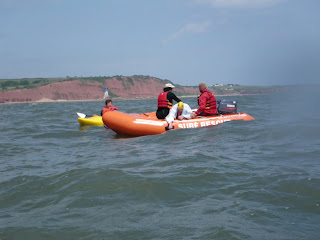 Despite today's whipping wind the sun remained shining and quite a few graced our sands and sea for their Sunday, It was relatively quiet as far as the first aids go with one shin wound and a irritated eye from windblown sand.
It was also the Fairway Buoy Swim and we provided rescue cover with our Arancia for the duration of the 4.75mile Sea Swim.
Posted by Exmouth Beach Rescue Club at Sunday, June 13, 2010 No comments:

This weekend is set to be a good one so pop on down to the beach and remember your sunglasses and sun screen!!! 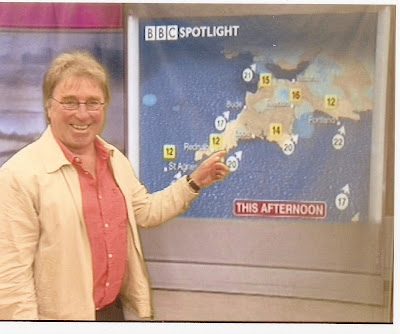 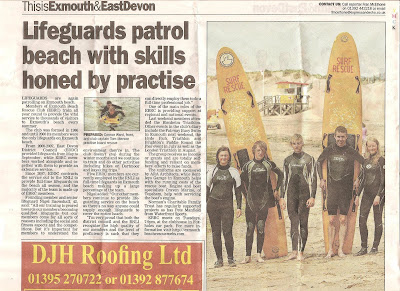 Here it is our pictures and a great write up from Snowy providing great coverage for the club and what we do!!!!
You can click the picture to maximise the print and picture or alternatively, you can read the report on this link http://www.thisisexeter.co.uk/news/Lifeguards-patrol-beach-skills-honed-practise/article-2280275-detail/article.html
Posted by Exmouth Beach Rescue Club at Thursday, June 10, 2010 No comments:

Due to a mix up with the council, the flag day that was originally proposed to go ahead on the 12th June 2010, has been put back to the 2nd of October.
Posted by Exmouth Beach Rescue Club at Thursday, June 10, 2010 No comments:

Guys if you want to go to this years fundraiser, please let Snowy know asap!! as you will require a deposit for your ticket.
We have had a Beach Rescue table the last two years and its been a great night!!

Today we were visited by a  Photographer to catch us in action prior to the press release going into the Express and Echo. 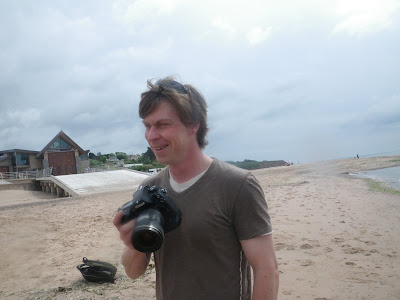 He took lots of pictures with both telephoto and wide angled lenses, one of which to be included within the release was this, a conscious patient paddleboard rescue. 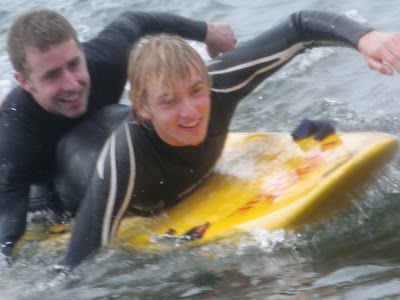 Todays RLSS trainer Andy was really putting the candidates through their paces, while tough on them today it will only enhance their fitness and make them fine candidates for both Club patrols and the usual pre season RNLI recruitment drive. 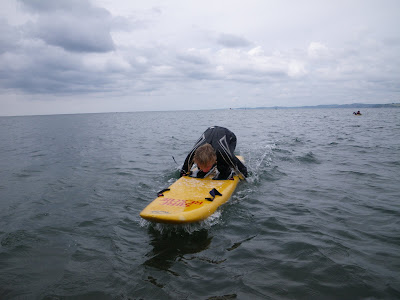 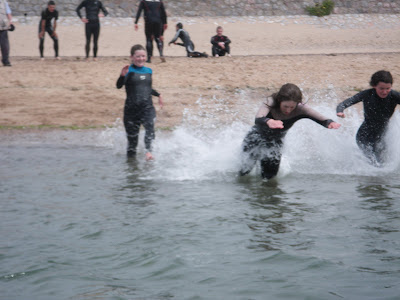 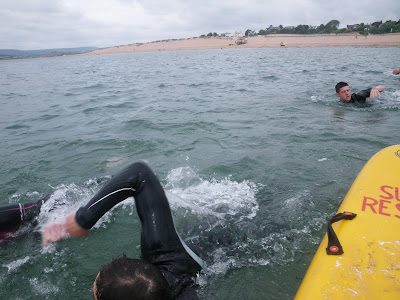 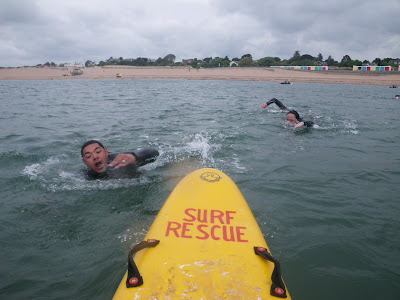 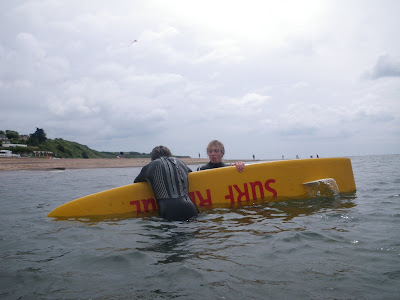 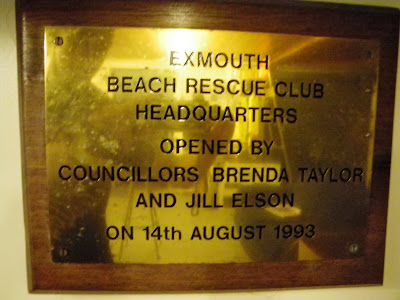 Today was the day, we received 6 surf rescue labelled SLSA conforming Paddle boards fro a very generous lifelong supporter of the club, these will be instrumental with our training and a real asset to our patrols!!
We cant thank this individual enough. 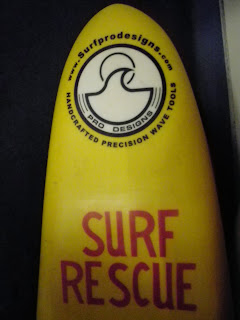 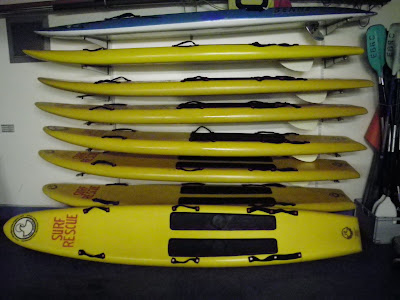 The boys Snowy and Dan at lunchtime today sorted and packed up the boat for a weekend of rescue cover at the Triathlon.
I can confirm that Freda looked after them both very well and with the boat in tow, they have arrived in Blenheim's grounds, set up camp and are preparing themselves for the weekend ahead. 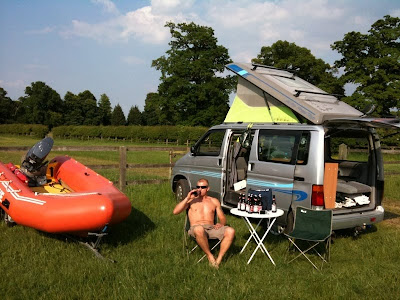 The press event was a great success with representatives from ARA Architects and Craven Marine Engineering giving up their time for photos and a meet and greet session with the club.
Many thanks to them both!! 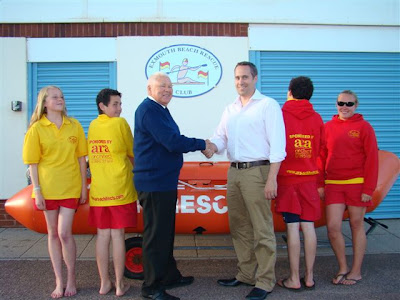 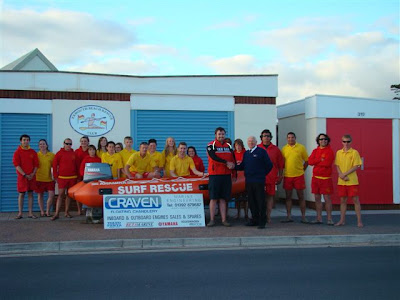 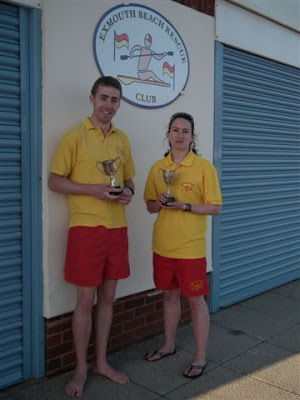 The new part of the EXE Cycleway was officially opened on the 28th of may, you can access this part by crossing over the bridge by Lympstone train station, this is a great place to walk cycle or take your longboard's out for a cruise!!
Just shy of four miles if you start at Exmouth. Its a relatively flat coastal pleasure, so chuck the vans on and play 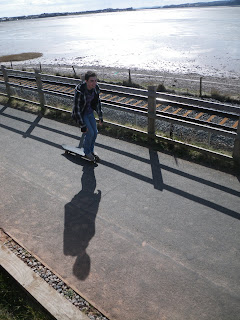 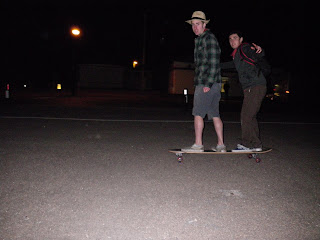 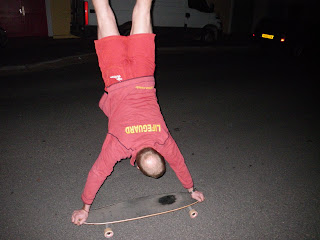 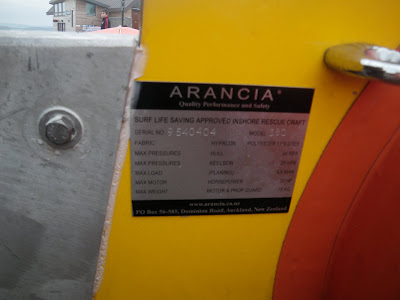