Sunday the 22nd brings a wave 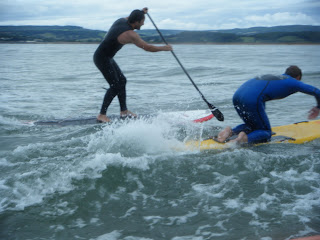 The Sunday gone was our patrol/training day caught on camera, the weather turned sour and the heavy downpour chased even the most hardened Grockle's away from the beach, this enabled us to launch the boat and learn important surf orientated skills, it also allowed us to get a cheeky little surf when the boat crews were kind enough not to squash the clean but little waves! 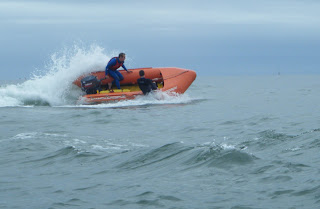 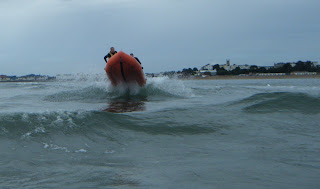 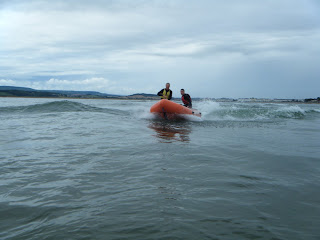 The sun was kind enough to return for the afternoon however the numbers on the sand was still shy of what is expected this time of year possible for repercussion of the earlier shower, but those that did provided us with a few minor first aids.
Posted by Exmouth Beach Rescue Club at Saturday, August 28, 2010 No comments:

If you go down to Orcombe today your sure for a big surprise!!

Sunday our Guards at Orcombe Point witnessed quite a natural occurrence with the explosive opening of a sink hole beside our tower, the sand bubbled and curdled before slipping into a 6ft diameter hole, which the club tested for safety before cordoning of the area and organising the contact of of the council.

Here's a couple of pics of this rare beast attempting to eat the 6ft tall captain. 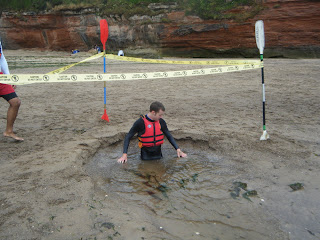 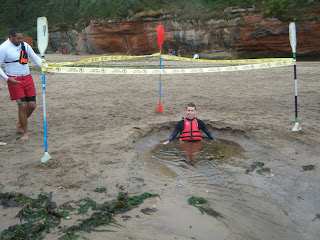 This year the tide assisted 1.75 mile swim from Starcross to Exmouth was chaperoned by the membership of Exmouth beach rescue on Kayaks, Prone Paddle boards and Stand Up Paddle boards as well as with our Arancia IRB,
The Club made there way over to the ferry steps and waited for the start of the event.
Due to the overwhelming entry of this years event the club was heavily relied on and thansk to our support all of the 28 entrants were able to take part. 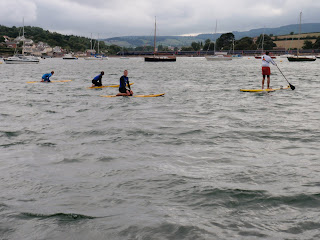 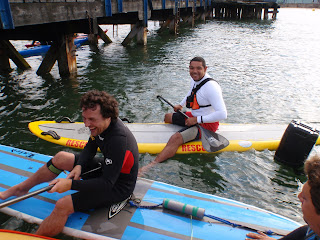 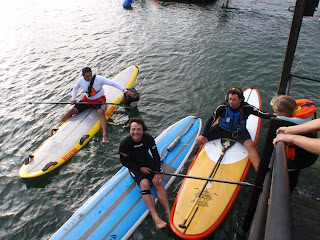 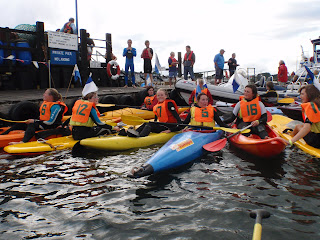 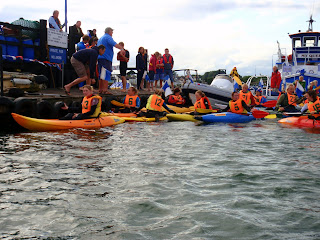 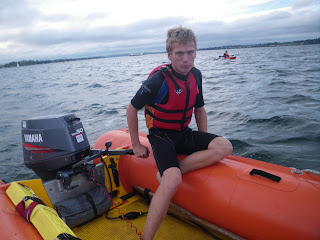 These Gentlemen embarked on a 340 mile cycle ride following the Devon border as closely as possible in 6 days, they endured a heavy fall and injured knee as well as multiple punctures in one mile following a kick sustained to Joel's bike suffered on the Lynton railway.
The first night they reached Dulverton 97miles from their start after 10hrs19mins arriving at 2am, they stayed here until the morning when they departed for Combe Martin 39 miles away.
Their next stay was at Stratton 53miles away taking in the sights of the north coast, before heading down through some of Dartmoor national park towards the next resting area at Yelverton 43 miles later, where David unfortunately fell and injured his knee worthy of a hospital visit he left bandaged on the advice not to cycle more then 2 miles, however bravely they plodded on until Plymouth where repairs from that earlier kick were finally required following a double puncture within a mile. It was then on to Dartmouth 50 miles away before returning to Exmouth and finishing at our Beach Hut.

The figures have yet to be finalised but it is looking likely that the sum of around £500 will be entering the charities account.

Gentlemen we cant thank you enough, I'm sure after those hills your legs are happy to be resting.
Posted by Exmouth Beach Rescue Club at Monday, August 16, 2010 No comments:

Snowy is never off duty!!

AN off-duty fireman has been praised by the man he rescued from drowning, after his kayak capsized during a fishing trip off a Devon beach.
Nigel Snowshall, 42, who is also in charge of volunteers for Exmouth Beach Rescue, was paddle-boarding with his teenage daughter and her friend when his skills were put to the test.
Mr Snowshall was alerted to the 56-year-old man 500 metres off Budleigh Salterton.
He realised the man, who has not been named, was in the sea when his kayak overturned and paddled out to pluck him to safety and return him to his worried wife on the shingle.
"The man was in shock and hypothermic when I got to him," said Mr Snowshall, a watch commander at Exmouth fire station.
"He was exhausted and was beginning to turn blue with cold. He could easily have drowned.
"The man had been fishing in his kayak, but it capsized and he couldn't get back in. He lost his fishing rod and paddle.
"When I got to him he'd been in the water for about 45 minutes. I chaperoned him back in his kayak."
He added: "Back on shore my 14-year-old daughter Emily and her friend Emily Western helped wrap him in towels and get him warm.
"They even put his kayak back on the roof of his car. He was treated by an ambulance crew and taken to Exmouth Hospital suffering from hypothermia."
He was later discharged from hospital, non the worse for his ordeal.
"Conditions were very choppy," said Mr Snowshall. "He was such a long way out that I couldn't see him at first.
"He's very lucky to be alive. His legs were numb. Afterwards he couldn't thank me enough. But luckily this is the sort of thing I do as a member of the beach rescue. It was a good job we spent the day at Budleigh."
Mr Snowshall praised his daughter — also a member of the beach rescue — and her friend for their efforts in helping to comfort the man when he was brought ashore, saying beach rescue training had paid dividends once again.
The Exmouth RNLI inshore rescue boat was also called to the scene and Mr Snowshall paddled lifeboatman Kerry Wreford who was transferred from the inflatable to the beach to help the casualty.
Posted by Exmouth Beach Rescue Club at Sunday, August 15, 2010 No comments:

Courtesy of Swim Safety and the organisers of the London Triathlon the Arancia went to the capital to provide a rescue boat service for the competitors taking part in any of the 3 swim distances. The team that travelled up were BK Flic Maff and Tom.

Over the weekend the team worked hours from 4am until 7pm to cover the races and picked a handful of swimmers out of the water that got in to difficulty during this time.

Travelling up in the Prosite Van the boat was deflated just enough to provide a very comfy platform for the 7+ hour journey up due to both traffic volume and a fire in the Dartford tunnel. 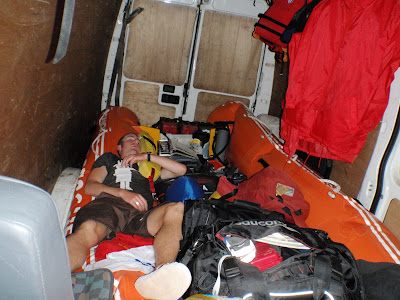 We also used this event to show the clubs pioneering rescue techniques using a stand up paddleboard Courtesy Of Tids who with Jim also joined the Kayak teams to provide a higher point of visibility and help swimmers if required. 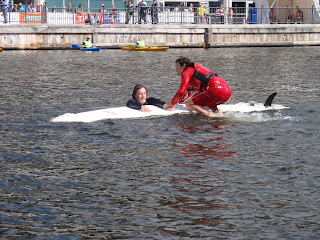 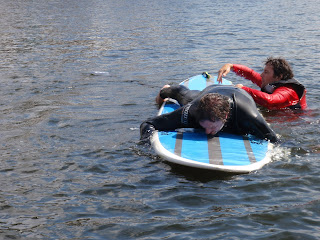 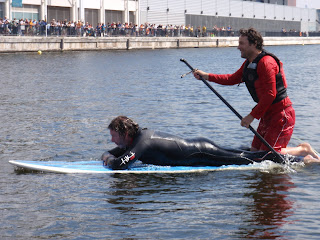 A tiring but overall  great weekend was had and our presence was a great success, to celebrate we stopped of to grab some food at the famous Ace Cafe 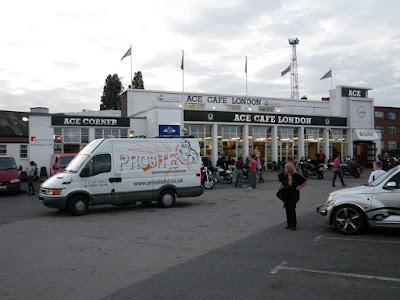 Here's a few more pics from the weekend enjoy. 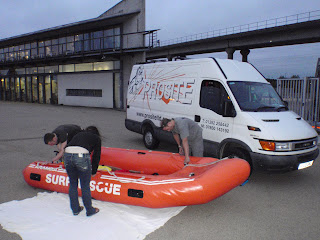 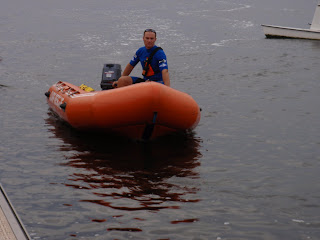 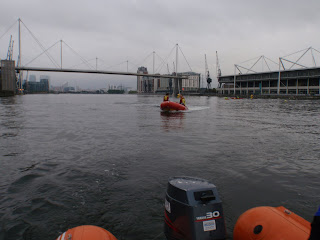 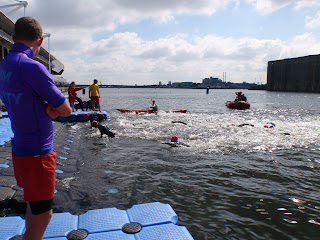 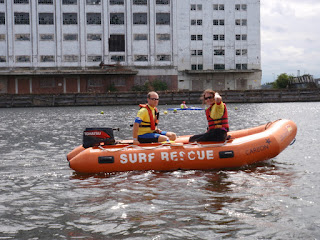 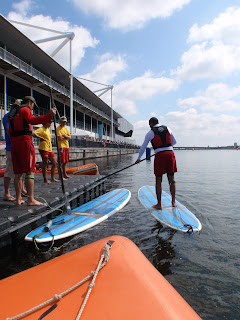 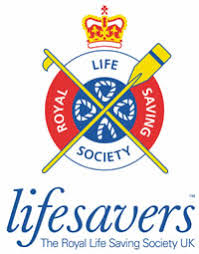 Wednesday the 5th bought the GB team down to the club and beach to do some training and use our club as their base, we provided lifeguards and cover for the boot camp provided by Ian Hutchings SLSGB team Coach. and the swimming, paddle board and ski drills he asked of his team members.
Posted by Exmouth Beach Rescue Club at Tuesday, August 10, 2010 No comments:

The 4th of August came around and so did our Demo performed for the public beside the octagon, it is our opportunity to show those interested our rescue techniques and equipment an insight into the sport side of Surf Lifesaving and as well as a chance to meet our lifeguards and club members. 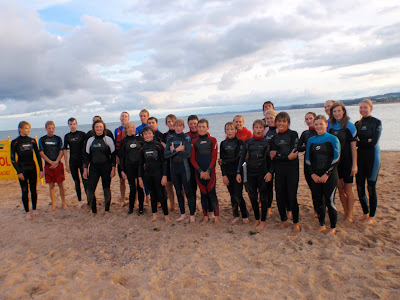 The rescues performed were the free swim, Peterson Tube rescue,Torpedo Buoy rescue, Paddleboard, Cobra Ski and IRB rescues on both concious and unconscuiuos patients. Ron our club president provided expert commentary and to cap it all off a mass rescue incorporating every one of the rescues!!

Many thanks and kind regards to all those who kindly donated to the club!!! 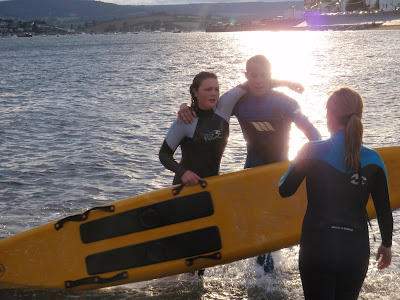 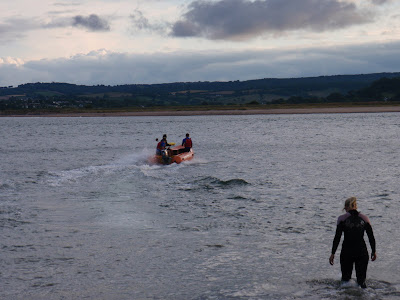 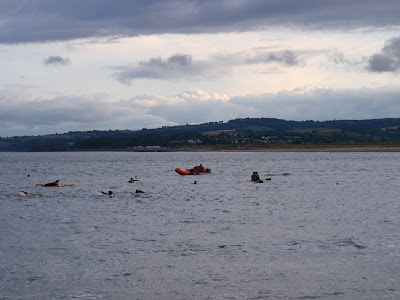