So much more to follow but here's a little teaser 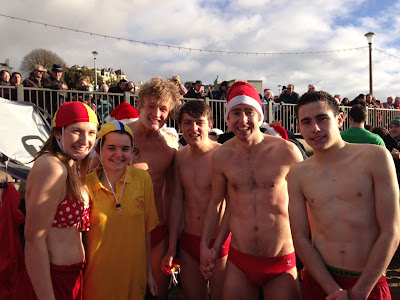 INCLUDING A VIDEO :)
Posted by Exmouth Beach Rescue Club at Saturday, January 19, 2013 No comments: 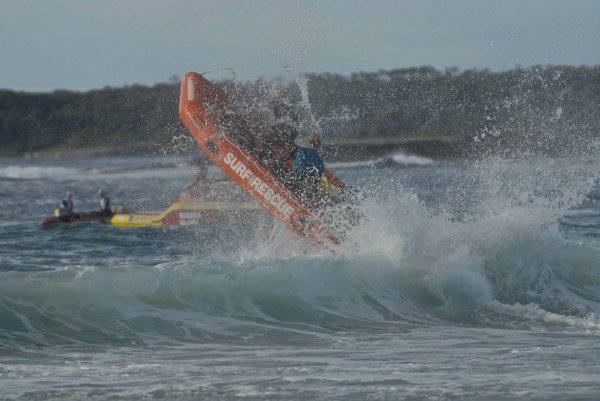 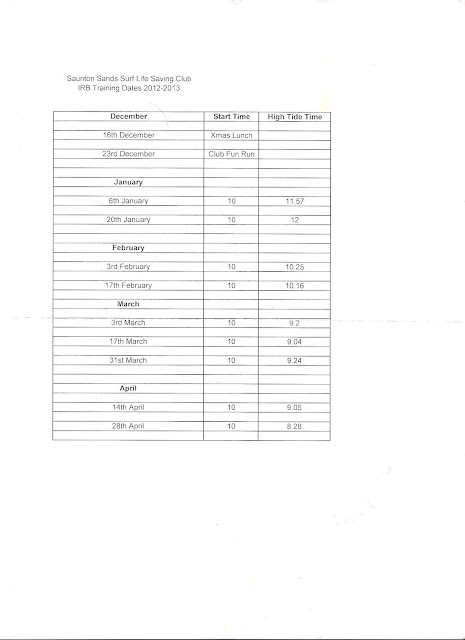 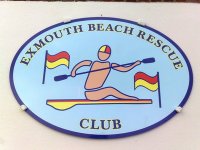 Just what your club got up to in 2012, we kicked off proceedings with a joint litter pick, where we used our clubhouse as the base for a stroll amongst the tideline armed with graspers and bags courtesy of East Devon council's streetscene and heavily advertised by the charity surfers against sewage.

Tids spent some of his spare time offering the charity Surflifesaving GB, advice on how to help the fifty plus voluntary clubs that they are responsible for.

A few of the club members then hooked up with the British surf rowers for a taster session down in Carbis bay, St Ives and performed heroically amongst established crews for a top 3 finish in the race at the end of their 5 hours intensive training.

The British divers have a marine rescue team who performed their annual training exercises on the beach with the club of volunteers assisting and providing safety cover for their water drills.

The first triathlon of the year, Blenheim was attended by 5 members who oversaw the international field in this world renowned event for the entire weekend both on land and in the array of watercraft.

Next was the first of the years competitions our regional champs where the club although small in number are huge in heart and their efforts managed to claim Exmouth 13 medals in an array of colours across an age range of 11 to 40 keeping those elitist competition clubs on their toes.

We then tackled the task of providing a training session worthy of a premiership rugby team, hosting 40 of the squad from their top academy players to their entire first team squad. The day proved extremely popular and is set to be incorporated into their training for seasons to come.

Once more to competition we returned with a team event at Teignmouth in the lifeguard challenge to profile the Surf lifesaving scene at their annual carnival, it was another dominating performance by the club which was then followed by an appearance in the big bay dip long paddle, which is a long sea swim and prone paddleboard race.

One of our club members Nigel Snowshall was asked to provide safety cover by the air ambulance while it put its recruits through its paces in the water crash and recovery scenarios.

Two of our members Ashley Jones and David Tidball - Tids also provided a course in sea safety and awareness for the St. John's ambulance cadets resulting in certification for all of the attending children.

It's not only in the water you find out guards we leant ourselves to help in a large number to take part in the Rotary Club charity walk which despite the horrific weather we smiled through.
It was also at the rotary clubs night at the proms that the club attended to talk to the public about the safety we provide for the beach users of Exmouth.

Three more triathlons followed London triathlon was attended by 5 more members and we were fortunate enough to have 3 members provide safety cover for no other then the Olympic triathlon and six lifeguards attended the first year of the dawlish triathlon providing both safety boat and paddleboard cover.

A chance meeting in the summer with some girls paddling outrigger canoes led to our next visit from the outrigger canoe club London who following our original chat and interest, decoded on a club training away day hosted by the club on the tranquil shores of Exmouth

we also did a long charity walk in horrific weather conditions to raise money for our new defibrillator, dressed as hula men and women for the Exmouth carnival and donned dinner jackets and boardshorts for the Pavilions night at the proms.

when considering how busy we have all been providing cover around the country the fact that we also ran lifeguard cover on the beach for all the weekends and public holidays during the period of may to the end of september
attending 427 incidents which included 12 major rescues, advice given to 374, 29 minor first aids shows how well the club can operate when stretched.

Most importantly however, the club provided training and qualification to 10 new lifeguards, 21 juniors who took their surf competencies involving surf board and ski competencies, 2 surf lifesaving coaches and 1 trainer assessor showing the clubs commitment to both continuing professional development and issuing the training for life's to be safer at sea. something we have commited to since 1986.